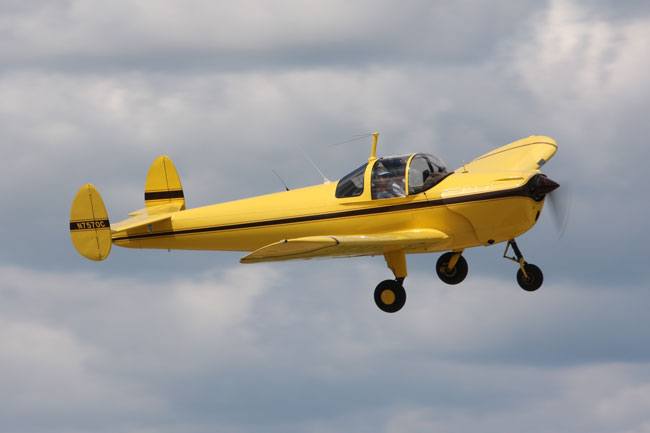 If there’s a reason why the Ercoupe doesn’t look all that weird to us, it might be because it’s been around so long, since the mid-1930s, in fact. Over the decades, it was in off-and-on production by at least five different companies, including Mooney, which made a single-straight-tailed version of the Ercoupe, the M-10. Overall, more than 5,500 of the planes were produced. (We’ll refer to them all as Ercoupes here.) Any way you look at it, the Ercoupe was an odd bird. Created by the legendary Fred Weick, the plane was designed to be hard to stall and easy to fly, and to land.

The plane is all-metal, tricycle gear and, unusually, features two-axis control, so there’s just pitch and roll.  So no worry about the rudders, because there aren’t any. This means you can’t slip it like you can a conventional-control bird, but they’re still surprisingly easy to land even in a slight crosswind. Many later Ercoupes do have rudder control, and as with many models, the Ercoupe got more power over the years, up to 90-hp, which helped its meager performance become modest.

With a cruise speed of around 90 mph, the 'Coupe isn’t fast, but it is pleasant to fly. Though there isn’t a lot of shoulder room in its narrow cockpit, you can slide the canopy back in flight and enjoy the breeze. This feature might sound quaint, but many owners love having their very own flying convertible.  While Ercoupes have started creeping up in price, you can still get a nice one for $18,000 or less.

See specifications for the Ercoupe or read more about it.