Opportunity Knocks
There I sat as the consequence of a misunderstanding, watching the ground drop away at a satisfyingly rapid rate. I anticipated a high nose attitude, but still underestimated and had to keep pulling back on the stick—even while setting the throttle and prop to “25 squared” out of concern for the noise-sensitive airport neighbors. I tried to hold 90 knots and reached the end of the 5,000-foot-long runway passing through 1,100 AGL. And the plane wasn’t even trying!

So how does an underemployed acro instructor and airport rat wrangle a ride in one of the air show industry’s hottest birds? It goes something like this…

Patty Wagstaff is a long-time, dear friend. Jay Land and his son Alex are flying buddies of both Patty and me. They have an Extra 300L in their stable and had recently acquired a Sukhoi Su-26. Jay e-mailed pictures of the Sukhoi’s new paint. I’m a big Sukhoi fan, so I replied that if “it” needed to be exercised, I’d be happy to do what I could. I copied the e-mail to Patty, along with the pictures.

First I got a response from Jay, who assumed I meant that I’d exercise their Extra; Alex was going to have first dibs on the Sukhoi. The same day I got an e-mail from Patty; she thought I meant exercising her Extra.

I’ve teased Patty for years—being a Sukhoi snob—that the Extra is a girly airplane. Well, I may be a snob, but I’m not an idiot, so after the 2006 NAS Jacksonville Air Show in Florida concluded, Patty’s crew chief and ferry pilot, Gene Powers, delivered one slightly used Extra to our airport. It was safely tucked into the T-hangar with my Pitts S2A, and I had some time to think about what had just happened. A clear schedule and good weather presented themselves a few days later.

Flight One: Basic Introduction
Starting the new Lycoming IO-580 required prolonged priming that would have easily flooded most other injected engines. Even so, it took two tries to get enough fuel to the injectors. Once running, the engine settled into a nice, hefty idle.

The rudder pedals have stirrups, and the toe brakes were right under the balls of my feet. I made sure to butt my heels against the lower portions of the pedal assemblies to remain clear of the brakes. It would be good practice for later.

The run-up and takeoff were all standard, except that when this airplane is ready to go, it goes! The rudder had lots of authority from the start of the roll and remained light, powerful and immediately responsive throughout the entire flight.

The wing tanks still had between 20 and 25 gallons of fuel, so any acro had to be limited to just +6/-3 G’s. But this was only an introductory flight; hard G was unnecessary. I tried the ailerons on the way out of the pattern and found them delightfully responsive, even with the “burdensome” mass of wing fuel. Getting a 30-plus-degree bank took such little time that the stick didn’t even reach half-travel—just a split-second pulse, and the bank was there. The Extra reached 3,000 feet AGL less than 5 nm from liftoff and leveled off at “24 cubed” (24-inch MAP, 2,400 rpm and 24 gph fuel flow). Patty said the IO-580 was thirsty, but this was ridiculous. Fortunately, the mixture came way back without the EGT going above 1,200 degrees, and the fuel flow settled down to about 17 or 18 gph. The ASI sat firmly at the top of the green arc—158 knots—affirming that this was a fast, overpowered hot rod. The wing fuel had to be burned out, so little attention was spent trying to lean to an ideal mixture setting.

I started with some mild, smooth acro: aileron rolls, barrel rolls, a loop and a wingover. The ability to sustain G was phenomenal, and the G squeeze lasted much longer than in the S2A. The over-the-top maneuvers peaked at more than 1,000 feet above their entry altitudes and felt effortlessly liquid, especially compared to the Pitts. All this at a medium cruise setting of between 20 and 24 inches of MAP—and with wing fuel! Oh, my…

Because aerobatic pilots have to manipulate the angle of attack with finesse and accuracy, I thought a stall or two might be in order. So with the area cleared, power came to idle and I eased the stick back. The airplane is slick enough that the pitch rate was too fast, resulting in a climb. When it finally let go at less than 60 KIAS, the airflow was plainly audible as it detached from the canopy. It sounded like a breeze whispering through bedsheets on a clothesline. The wing behaved well enough that it maintained aileron control. I added power—10 inches MAP—and put it into a 40-degree left bank. It flew at 60 to 65 KIAS. Throttle was forward to 24 squared and the nose up to 40-plus degrees. When it stalled in this configuration, the airplane had more than enough rudder to maintain directional control. Easing the nose down slightly got the Extra flying again. The power-on stall had netted more than 1,500 feet.

Advertisement
More positive G maneuvers followed; loops, rolls, barrels, modified half-Cubans and reverse half-Cubans, and wingovers (90 and 180 degrees of bank) just kept flowing. The power remained between 20 and 24 inches and the prop at 2,400 rpm; still the airplane gained altitude. A full-deflection aileron roll was next flown in an effort to track the roll rate. After four or five linked rolls, I couldn’t trust my mental timing, but the roll rate was easily 300 to 360 degrees per second. Even with partial power and the heavy fuel load, we were soon at 5,000 feet.

ATC called us out as traffic to another aircraft. I held an orbit at first, then settled on a straight course roughly east-bound. I still couldn’t find the traffic, and the other airplane didn’t see me either. (Two-dimensional thinking wasn’t working.) Full power, pitch up for a climb and the Extra went from 5,000 to 6,000 feet in well under a minute. Just then, we spotted each other with more than adequate clearance.

After a few more maneuvers, it was time to head back for landing. Power was back to 16 to 17 inches for the descent and the traffic pattern. Upon reaching the abeam point on the downwind, the throttle came back even further, and a descending turn began. Between modulating the power and manipulating the turn, we arrived over the numbers and flared to the landing attitude. There was lots of control authority in all three axes. Some ratcheting showed in pitch and, to a lesser extent, in yaw—my problem, not the plane’s. But the touchdown was anticlimactic, just as in the Extras and Sukhois I’ve flown before. Aircraft in this class all seem to have great ground manners.

I did two more landings, and found that with the throttle at idle, the plane came down as steeply as the S2A—maybe more so. (There’s massive drag in that prop.) The nose was higher than the Pitts’ landing attitude, but without the top wing, there was the illusion of better visibility. The crosswind drifted us right of center, but that was again my fault and not the airplane’s.

Lots of information in only 42 minutes!

Flight Two: Subjective Handling Review
The second flight was less formal; its purpose was to get a subjective feel for the control, handling and authority of this bad girl. But first a baseline comparison was necessary, so it was off to fly the Pitts. I chose a simple sequence that was also familiar—the 2006 IAC Sportsman Knowns:

This sequence normally required around 1,000 feet to fly in the S2A, the big loser being the spin—no way to make up the altitude once the little biplane was through that. On the other hand, it didn’t cost more altitude after the spin, either.

Again flying at less than full throttle (25-squared, I believe), the Extra showed her “overpowered” side by gaining back the altitude lost in the spin and then gaining a bit more. The maneuvers felt easier and less rushed, even though the increased speed gobbled up the box faster than the S2A. Years ago, Patty told me about her first Extra 230. She said flying monoplanes after biplanes seemed like “moving through a fluid,” making things effortless and maintaining energy throughout figures. I certainly found that to be true of the 300S.

The time in the vertical was sublime. Not only did the airplane have much better vertical penetration than the Pitts, but it possessed a much superior “hang time” as well. The pitch control across the tops, even in the tight shark’s tooth, was more than adequate. The roll rate off the Immelmann was quick and crisp. The loop was large, the hammerhead delightful and the roll rates rapier-swift. All-in-all, there was excellent control that made the sequence seem much easier to fly.

Flight Three: In The Box
I wanted to fly two additional, familiar sequences to again compare the performance with my Pitts and to let me evaluate this airplane against some “known territory.”

I did some warm-up maneuvers first. The wing fuel was finally gone, so I got to quantify the vertical performance. From 185 knots at 6 G’s at the pull, the altimeter showed 2,000 feet of vertical. Increasing that to the 220-knot red line at 6.5 G’s yielded 2,500 feet AGL before a quick hammerhead.

My personal solo sequence usually includes eight minutes of 29 air show maneuvers. Rather than a list of figures, let me say that overall, I was impressed with how easy the routine was to fly in the monoplane. While it’s all I can do to squeeze this sequence out of the S2A, the 300S left me with enough surplus energy to spontaneously add rolls here and there. The “set time” between maneuvers, or between segments of the maneuvers themselves, was much longer. This, in turn, made the rhythm of the sequence less hectic and more deliberate. The contrast between the Pitts and the Extra was the difference between work and play.

Then, for fun, I flew spontaneous figures as the plane moved through the aerobatic box. If the altitude got low, I used a maneuver that gained it. If the speed was high, I was able to draw long up-lines or perform multiple snap rolls on top. With the capability of the 300S, it was easy to string a sequence together that utilized each and every corner of the box in an ebb and flow. All in all, it was a great way to end our brief time together. The landing even worked out well.

If this plane were a woman, she’d wear black leather and ride a Harley. She could bench-press 250. If you’re nice to her, she might show you her tattoo; if you’re not nice, she might just punch you in the face.

So it would be worth your while to treat her well and learn her ways. She’ll respond to respectful handling and repay you in kind. She may be “bad,” she may be a “girl,” but she’s definitely not girly. She’s all woman, all business and worth every minute. 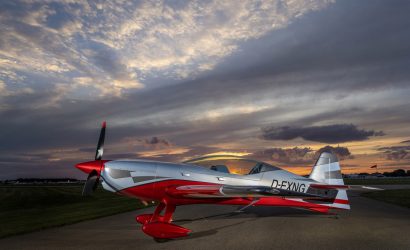