You know a designer has confidence in a new experimental aircraft when his first journey following the required home field fly-off is a circumnavigation of the earth. Then, again, the fact that the designer and the airplane are both products of aviation-besotted South Africa may provide a more apt explanation for such a mad adventure. Nonetheless, I told myself, I had no cause for concern that the example of said airplane I was about to fly at Sun ‘n Fun (SnF) this past spring had been constructed in just four days time.

The Sling 4 Turbo kit aircraft from The Airplane Factory (TAF) of Johannesburg, South Africa, is the four-place follow-on to the Sling 2, which debuted to much acclaim at AirVenture Oshkosh 2009 during an around-the-world journey, with designer Mike Blyth and TAF co-owner James Pittman aboard. Several months of flight tests preceded that westbound circling. Not so two years later, as the Sling 4, incorporating design lessons learned with the Sling 2, came to life, and the TAF team plotted another globe-girdling trip through OSH. 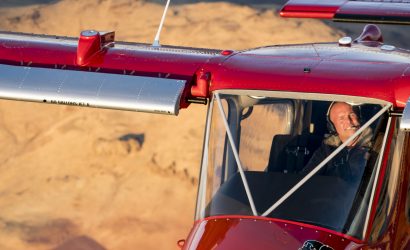