When I spotted it on my Facebook friend’s page I was instantly intrigued. The story said “Cessna 175,” but it was like no Skylark I’d ever seen before. It was a no-holds-barred backwoods machine (and then some) owned by Jeff Whiteley and rebuilt by aircraft refurbisher extraordinaire, the aptly surnamed Kyle Bushman.

If you’re not familiar with the story of the Cessna Skylark, it’s one of the odder chapters in Cessna’s history. At the time—Cessna built the 175 from 1958 to 1962—the idea of a geared engine was compelling. The chief appeal of the GO-300-E was an increase in power for the same displacement and a little more weight. As it turned out, the engine did all of that good stuff. The Skylark was more than a 172 clone with a geared engine. It was beefier and faster, with better climb and runway performance, to boot. But the engine proved costly to maintain and suffered a short real-world time-between-overhaul interval, so Cessna shelved it after four years instead of trying to fix things, which makes sense, as the reputation of the plane was poor (because of the engine) and also because there was no clear path to better reliability.

The 175 I spotted online, however, looked nothing like its nose-banging production form. In fact, I initially assumed it was a Cessna 180 done up in a badass way. I’m guessing most folks think that same thing, because this plane has a tailwheel, big tires and something funny on the leading edge of the wing: slats!

The story of Whiteley’s 175 is a great one. (Check out our feature story on it in an upcoming issue of Plane & Pilot). The airplane, a 1958 model, had been sitting for the better part of two decades. And while we won’t go into all of the gory details here (so, again, check out the feature coming soon) the project completely gutted the 175, made into a taildragging, big tired bush plane and replaced the GO-300-E with an O-470, the same six-banger engine as in the Cessna 182 Skylane. With all the changes, it goes without saying, the registration had to be amended to Experimental Exhibition, so consider this article part of that exhibition.

The finished plane was immaculate, like all of Bushman’s work, but it was pretty much unrecognizable as a 175.

And that brings us to the slats.

As you might know, leading edge slats are high-lift devices that are certainly nothing new. They’re been around for many decades, and though they’re effective at eking out those last little bits of lift at the ragged edge of flight, they’ve never really caught on, most likely because they add complexity and, hence, additional production time.

You might know some of the planes that sport leading edge devices. They include the defunct Helio Courier, the popular Zenith kitplanes, the Wilga (the donor plane that became arguably the awesomest bush plane ever, the late, great Draco) and, oh yeah, a bunch of Boeing and Airbus models, too. Apart from the heavy iron, these planes, while loved by many pilots, are niche models (with the possible exception of the Zenith, actually). They all use leading edge slats to lower stall speed substantially. The Courier, for example, can maintain control down even slightly below 30 mph. Find a bit of a breeze, and you’re hovering.

Sadly, the most popular light GA planes ever feature pretty vanilla leading edges, and that was certainly true of the 175. Something had to be done.

Bushman, who runs a super cool refurb shop in Oregon, Ragwood Refactory, told Plane & Pilot all about the slats project.

“The leading edge slats were truly a mega challenge because never in history could we find an example of a Cessna like this running slats. It was going to be a first time. We looked at all the manufactures on the market supplying slats to the experimental world and made phone calls to multiple companies and ended up with Randy Apling at Carbon Concepts, (http://www.carbonconceptsak.com/) a company in Alaska that makes some really cool and light mods for bush planes.

Randy had agreed to adapt his current kit for Piper Super Cubs to a Cessna wing, but made it very clear that he didn’t know what it would do or if it would benefit the Cessna wing like it does Super Cub’s.

After about a month Randy sent a kit to the shop with all the parts needed for the installation on Jeff’s 175.

Everything, including the placement of the slats, was an unknown, so we just had to go off of what the PA-18s running slats were doing.

When you do something like this there is no road map because it’s never been done. You have to make every decision along the way, as you move forward you become more and more educated on it to the point of almost obsession.

That said, we eventually got to a point we were happy with the installation, the placement and the attach method of the slats.

Next, we had to develop a flight test plan for the first flight. With safety foremost in mind we made conservative decision to progress slowly, and that meant staying on the ground until we knew more. So at first, we did high-speed taxi tests that we filmed to analyze later.

We then progressed to short “flights,” never leaving ground effect. At that point we reviewed the videos to make sure there was nothing unknown happening without us being aware of it through the flying manners of the plane.

Eventually, we got to a point where we we felt safe to do a first test flight. It was extremely positive. On the first flight we found a very significant stability in slow flight, and we had dropped stock stall speed by 21 mph! The new current stall speed out of the box was 35 mph—the 175’s book number is 55.

We both believe that with refinement we will be able to drop that even lower. Both Jeff and I walked away from the test flights confident in flying around at 40 mph, 15 mph below the book speed! The stall was a very subtle, so much so that the action of the stall itself was almost enough to break the stall.

We are still early on in the testing and have more flights and testing to explore the envelope. But we both feel very confident it will have been worth all the work. But the bottom line at this point is, where we are now with Jeff’s build, we have an airplane substantially outperforming others in its class for a much smaller budget.“

To read more about Bushman and Whiteley’s 175 project, check out the story in an upcoming issue of Plane & Pilot. 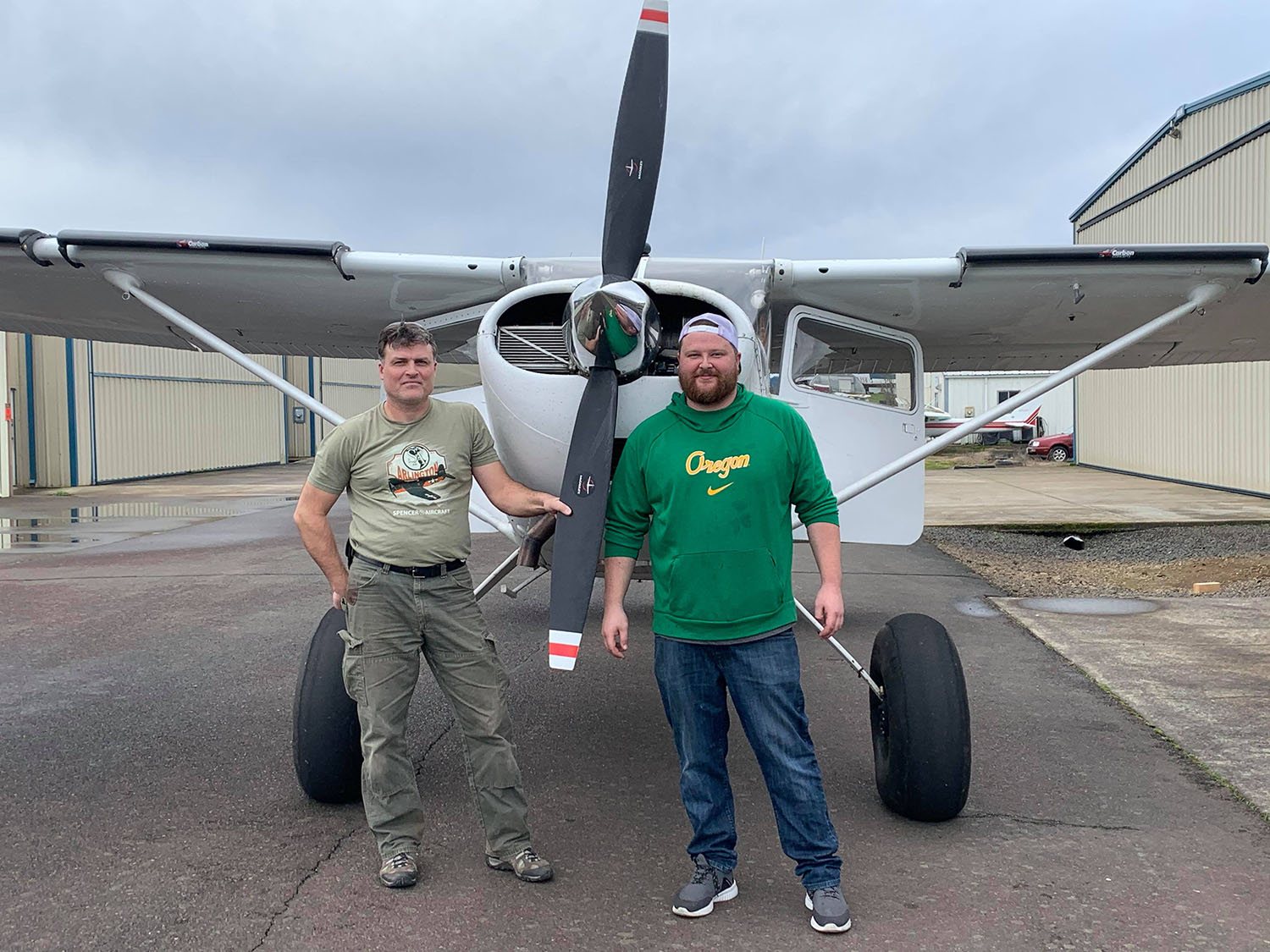 When Jeff Whiteley (left) asked buddy and aircraft restorer Kyle Bushman to build him a backcountry plane out of a disused 1958 Cessna 175 Skylark that hadn't flown in nearly 20 years, Bushman yes, hell, yes. Whiteley, who was an active participant in the project,, and Bushman decided one cool way to go was with slats. And, oh yeah. It's a taildragger now.