It was just a short while back when my longtime friend and fellow photographer and aviation nut Jim Koepnick was presenting his webinar on taking photos at aviation events that a thought occurred to me.

It was, in short, that Jim has taken a lot of great photographs of people who fly, people in Ryans and Cessnas and Cubs, in hangars, poking their heads out of the cockpits of Stearmans and Wacos, swinging wrenches and talking flying—you know, photographs of people being who they really are. And the life in their faces! It was a revelation. The very next day, I asked Jim how many portraits of pilots he had; you know, would there be enough for a gallery in Plane & Pilot? And if so, could we do it in the next issue!

Jim is one of the best aviation photographers in the world, and all you need to do is look at his work here and on the covers and feature stories in hundreds of aviation magazines, including Plane & Pilot. We’ve been lucky enough to have Jim shoot numerous covers for us. He’s got an eye for composition and light and motion that can be discussed but not really taught. It’s a gift. In his nearly 30 years as a photographer for EAA, and in his decade since of freelance work for titles around the world, Jim has had the opportunity to photograph hundreds of airplanes that are treasures and to capture them in ways that bring them to life.

But it’s not just the planes. Those of us who have been around aviation for any length of time realize that as rewarding as flight is, equally magical are the people who come into our aviation lives. And while we generally focus on the hardware or the hardware and how to outsmart it, we seldom turn the mirrored lens back toward ourselves. We should do it more often.

Because what is there in front of our eyes is extraordinary. We pilots are members of multiple aviation families, both highly focused communities, like Skylane owners or Seattle-area pilots, and globe-spanning networks of aviation friends who might see each other once every few years. There’s something that unites us, too. It’s a bond between people who have done something so remarkable that it’s hard—strike that, nearly impossible—to explain to non-pilots. It’s not just that, though. It’s the shared experience of seeing the world in a way, in so many different ways, that any mere earthling should have the expectation to experience. In short, we’re special people who’ve seen and done amazing things, all thanks to the gift of wings.

There are famous people in this gallery, as you’ll see. Jim’s portrait of both Bob Hoover and his hands are remarkable works. There’s Tuskegee Airman General Charles McGee, the world of Oshkosh reflected in his trademark eyeglasses. And that smile! You’ll see other faces you recognize, exceptional people who have done remarkable things. But the unifying trait here is a look on these people’s faces, or, rather, deeper still within them, that sense of our great joy and luck at having forged a life, or even a glimpse of one, in the air, and to have rubbed elbows in cockpits and around campfires with others like us who have that same sense of joy upon their faces, as well.

I’ll leave it with this. Thanks, Jim, for sharing these amazing works of art with us, and please keep your lens pointed at the planes…and at the people who fly them, too. 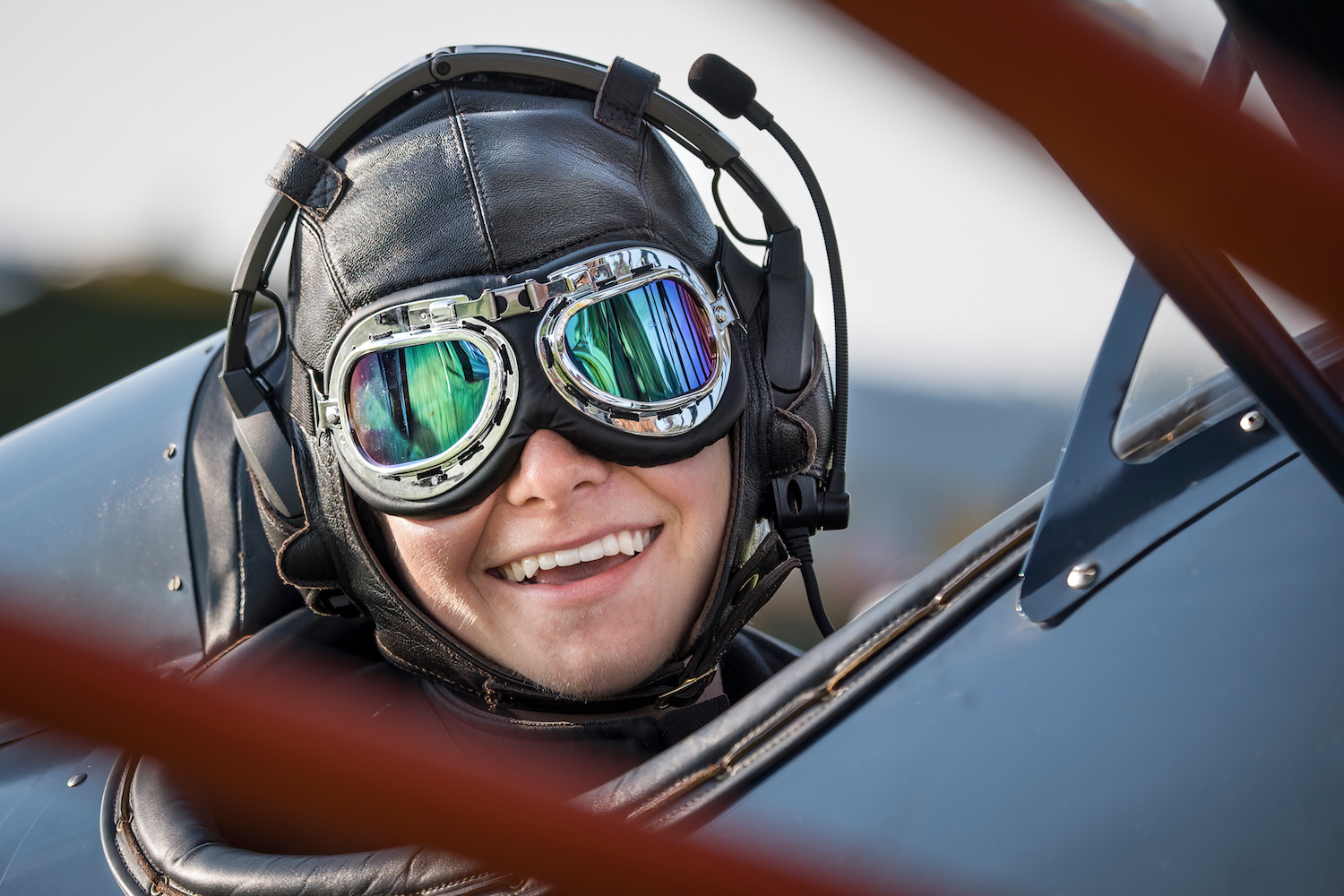 This wasn’t a planned portrait of Luke Lachendro as he taxied up to the Vintage Barn at Oshkosh a few years ago. It was the first time he had flown in to AirVenture and I was just standing by to greet him. But his smile was ear to ear and it was a moment I had to capture. 100-400mm ISO 200; f6 at 1/500 second.