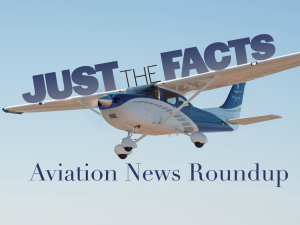 A Mesa, Arizona, woman donated the 10,000th unit of blood collected by The Civil Air Patrol’s Operation Pulse Lift mission. The CAP began the operation in March of 2020, shortly after the coronavirus pandemic began to sweep across the United States. In addition to collecting the units of blood, CAP pilots fly the precious cargo to remote medical facilities that need blood for transfusions and surgery but which face many obstacles in getting it.

Textron Aviation announced it was bringing back the Turbo 182, which interestingly is the Turbo 182T, the latter “T” not standing for “turbo” but just being coincidentally the next letter in the alphabet for the long-running Cessna Skylane series.

The Redbird Migration training symposium was a big success at its 2022 edition at the Aviation Center for Excellence in Lakeland, Florida. Two-hundred attendees were on hand (along with 600 who joined for the livestream) to watch presentations by GAMA’s Pete Bunce, Daniel Baker of FlightAware, and others. Next year’s Migration will be at the EAA Pilot Proficiency Center in Oshkosh from April 11-12.

A dramatic new video surfaced showing of the crash of an F-35C carrier jet while trying to land aboard the USS Carl Vinson earlier this month. The Navy confirmed the validity of the video but also launched an investigation to find the source of the leaks.

Avidyne announced that it was working with Jeppesen and the Recreational Aviation Foundation to expand the Jepp database to include more backcountry strips. Avidyne founder and CEO Dan Schwinn is a longtime supporter of the RAF.

The airline world was abuzz with new of the merger of Spirit and Frontier Airlines. The new company will be the fifth largest air carrier in the United States.

Dampening the news was the fact that Frontier had to cancel 22% of its flights on Monday; another 22% were delayed after IT issues threw the carrier’s scheduling for a loop.