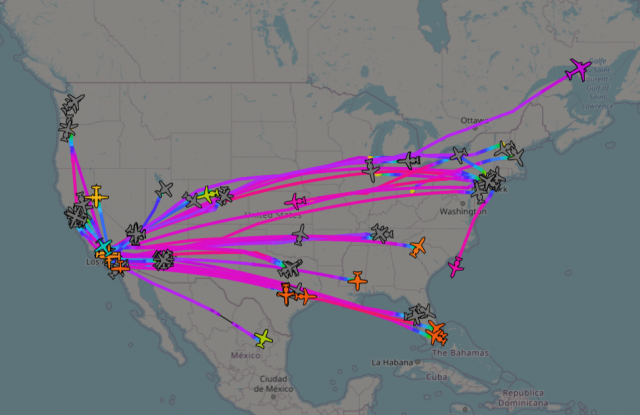 Enthusiasts of ADS-B-enabled flight tracking had a busy weekend split between the build-up of military flight activities in and around the Ukraine and activity surrounding Super Bowl LVI in Southern California. For Sunday’s big game, ADS-B tracking sites enabled viewers to track the four-ship Heritage Flight flyover to celebrate the USAF’s 75th anniversary, as well as an impressive amount of GA “heavy iron.”

On Reddit, one user posted an impressive screenshot of light jet departures headed mostly east and north, claiming, “Over 140 private jets depart…within ~5 hours of game end!” Other users chimed in to share memories of similar traffic at other popular sporting events, including Augusta during the Masters, Louisville at the Kentucky Derby, the Daytona 500, and Austin during Formula One weekend. A few more commented being part of the ground logistics required to support so many small aircraft for a big event.

Some users debated the math required to calculate the general aviation “carbon footprint” for the big game. On that note, on February 8 in preparation for game traffic, FBO fuel provider Avfuel announced availability of at least 56,000 gallons of sustainable aviation fuel (SAF) at FBOs “in close proximity to SoFi Stadium,” adding that it was providing SAF at Van Nuys airport “specifically for the event.”