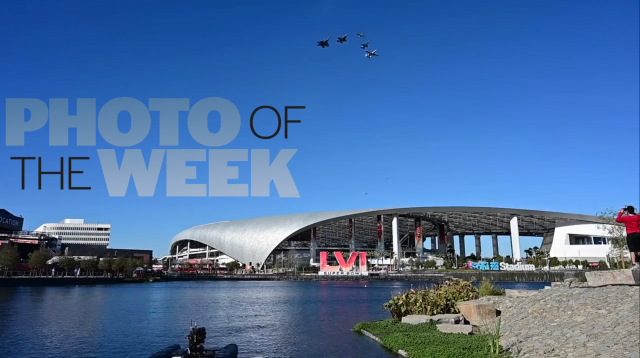 Our Plane & Pilot Photo of The Week, courtesy of the Air Force Heritage Flight Team, features the planes that overflew SoFi Stadium in Los Angeles before Super Bowl LVI. The formation flight, which was celebrating the 75th Anniversary of the formation of the United States Air Force, was led by air racer extraordinaire Steve Hinton in a North American P-51D Mustang. The other planes were a Lockheed Martin F-22 Raptor; a Lockheed Martin F-35 Lightning; a General Dynamics F-16 Fighting Falcon and a Fairchild Republic A-10 Thunderbolt.

The overflight was not without its controversy. NBC, the network that was airing the game, gave the overflight only a few seconds of airtime in what seemed to be a perfunctory fashion. The long shot missed out on the beauty and significance of the lineup of legendary planes and their importance to the history of Air Force aviation and to the nation, as well.

On the flip side, many pointed out that the flyover of SoFi was a bit off the mark, in that the stadium has a fixed roof, so none of the 70,048 in attendance would actually see the planes fly over, though we’re hoping they at least heard them.

We think that NBC could have taken a page from its own Winter Olympics coverage and done a special spot on the planes and the pilots who were flying them. That would be the kind of personal touch that would actually celebrate the service of hundreds of thousands in the last 75 years of a remarkable history.